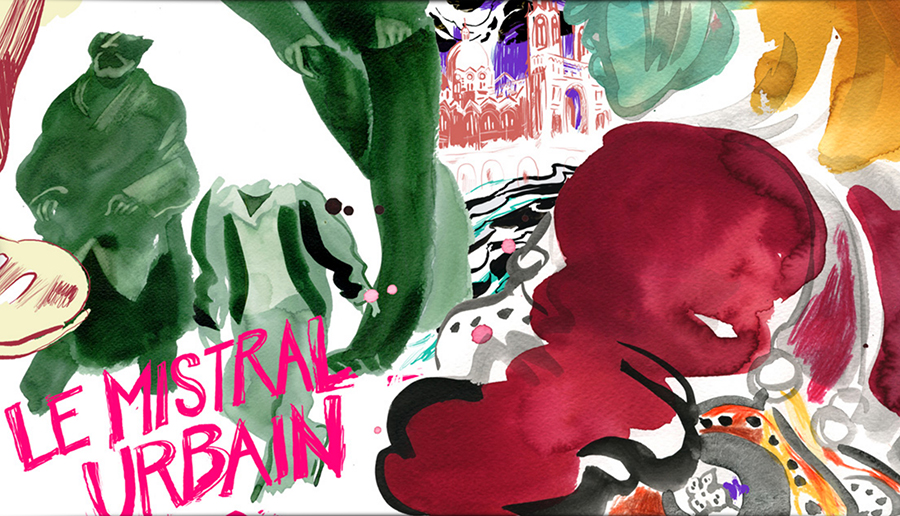 Marseilles, Mistral Urbain has been a unique opportunity for us, two sound creators and a painter, to collaborate hand in hand in making a poetic yet catchy portray of an exciting city. It is very rare to have the possibility to elaborate a project where images and sounds work closely, but use very different paths of imagination. The challenge for the sound part, was to make very short and significant pieces that would never last more than one minute, as opposed to a classic city soundscape. The challenge for the painter was to imagine the drawings out of those sounds, and build a fresco that would not illustrate the narrative, but take the essence of it and add some of the wild and colorful spirit of the city. Also, it was very refreshing to exchange ideas all along the project, as we often use to work alone in the process of recording and painting, and have very different personalities and approaches to our subjects. One of the biggest difficulty was to cut and edit more than 15 hours of sound  and make it short to 15 minutes, keeping in mind that those sounds could be listened to in any order, but had to tell a story. An impressionist story of the way people use and live the public space in Marseilles, and make their own little mythologies out of the constantly moving bigger one.The surprising part was to see how the painter would be inspired by those sounds. The project and editorial managers were very helpful at the end of the process to take out the best of it all, and make an interactive piece that has a rather simple form but uses a creative dialogue between sound an image. With new web projects like this, the field opened for  dialogue between the two is very large, and we are all very curious to continue to explore this territory.